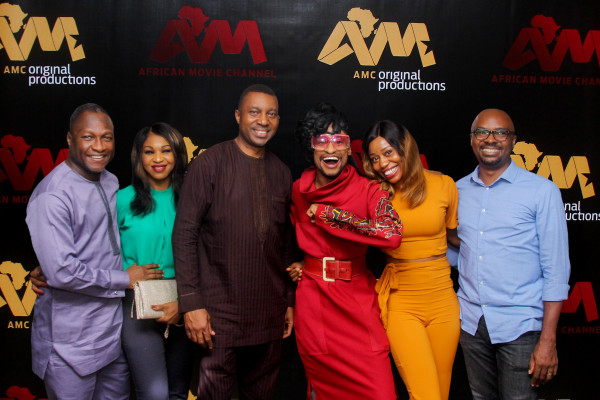 It was an eventful evening at the Signature Screen Hall, Filmhouse Cinemas, Lekki as Nollywood
industry goons turned out for the AMCOP (African Movie Channel Original Productions) launch on Thursday 8 th November 2018.

All guests had something to drink and nibble on upon arrival, and interviews were done by AMC’s
own, NY Obah Nana, the host of the acclaimed talk show, AMC Movie Talk. The show kicked off with a brief speech by AMC’s Production Coordinator, Immaculata Oko who
addressed the guests before the movie of the night, Something Strange, produced and directed by Paul Igwe was screened. After the movie, which was thoroughly enjoyed by guests, networking, mingling, and more interviews became the order of the night with more to drink and eat!

African Movie Channel is already well known for its superb Nollywood movies and compelling
content catalogue. Over the years, through its three television channels – African Movie Channel
(AMC), AMC Series and Nolly Africa, it has maintained an international presence in its mission to
entertain its viewers with gripping movies, series, talk shows and more.

The birth of AMCOP demonstrates AMC’s dedication and passion for excellent African storytelling by home-grown talent, in so doing adding its own distinct voice to African entertainment and will see no less than 20 exclusively-owned fantastic movies added to its library before the end of 2018.
AMC carefully selected the first set of filmmakers to start this journey with for their experience
and quality of productions, and because they share AMC’s vision and innovative approach to
filmmaking; Jade Osiberu (Isoken), Paul Igwe (Dance To My Beat), Ola Producer (5ive), Ema Edosio

AMC channels’ viewers will be the first to watch the new and exclusive AMCOP movies. Timed to
(Kasala), and Daniel Oriahi (Sylvia) are just some of these filmmakers.leadin to the holiday season at the end of the year, AMCOP movies will begin to air every Friday
from 7th December 2018, exclusively on African Movie Channel.