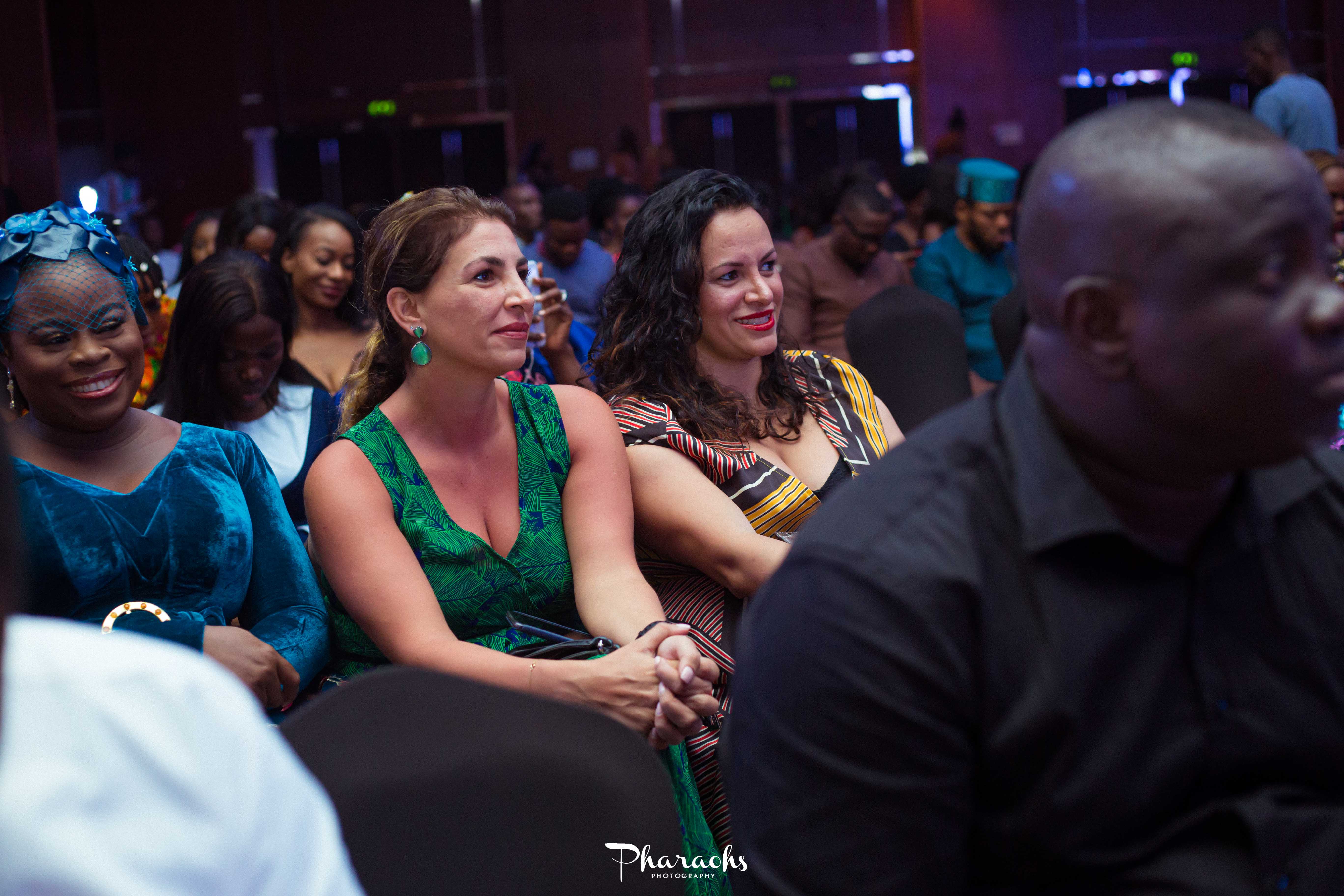 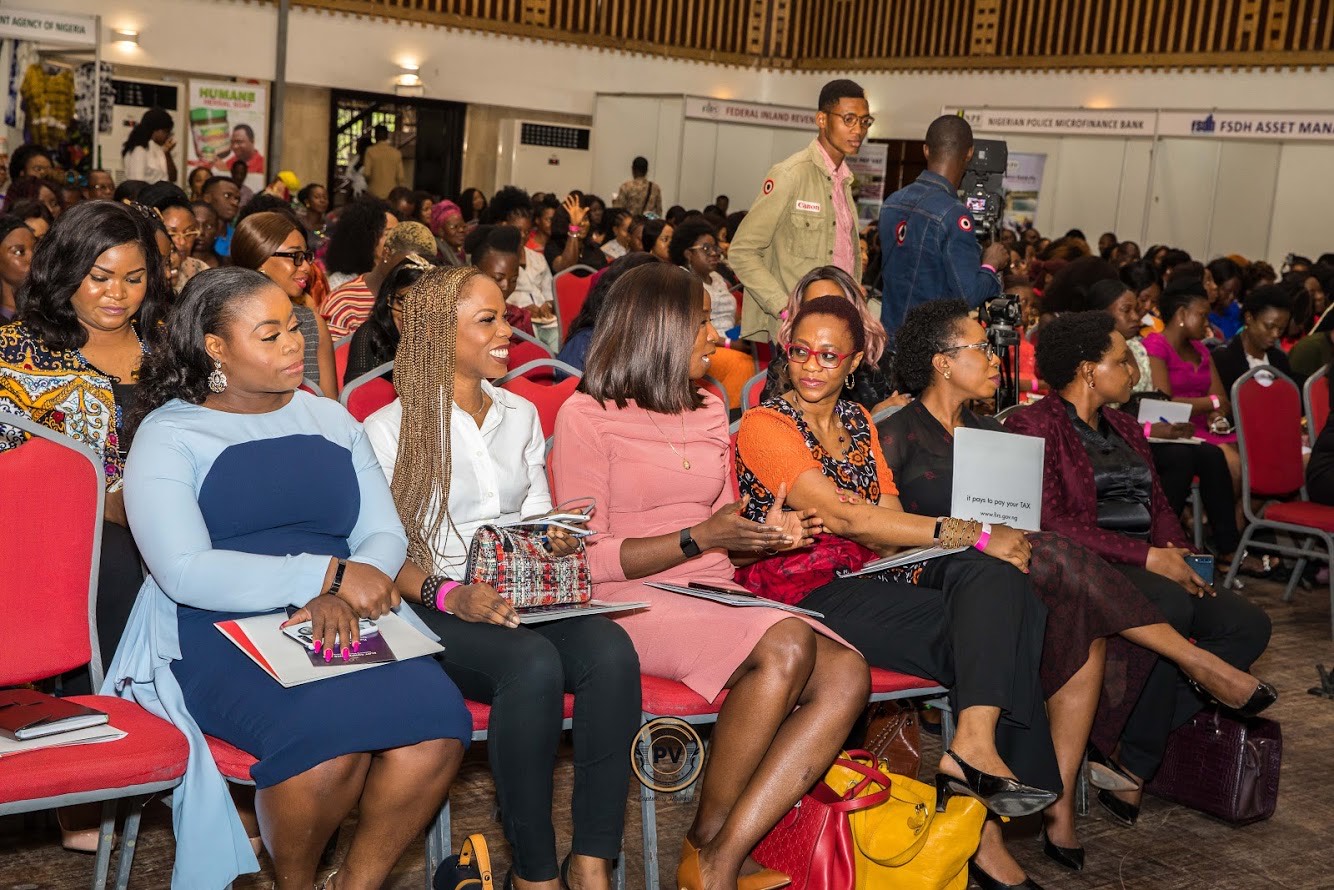 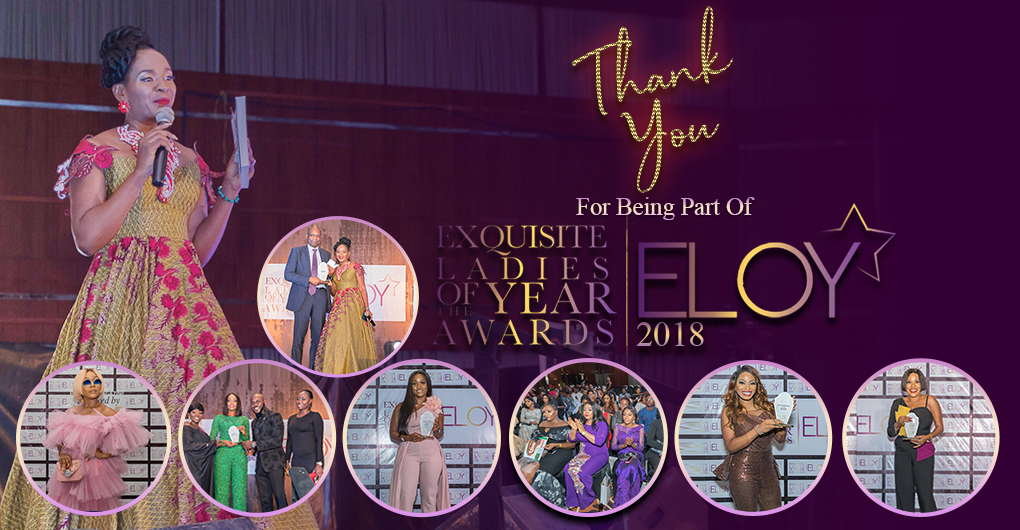 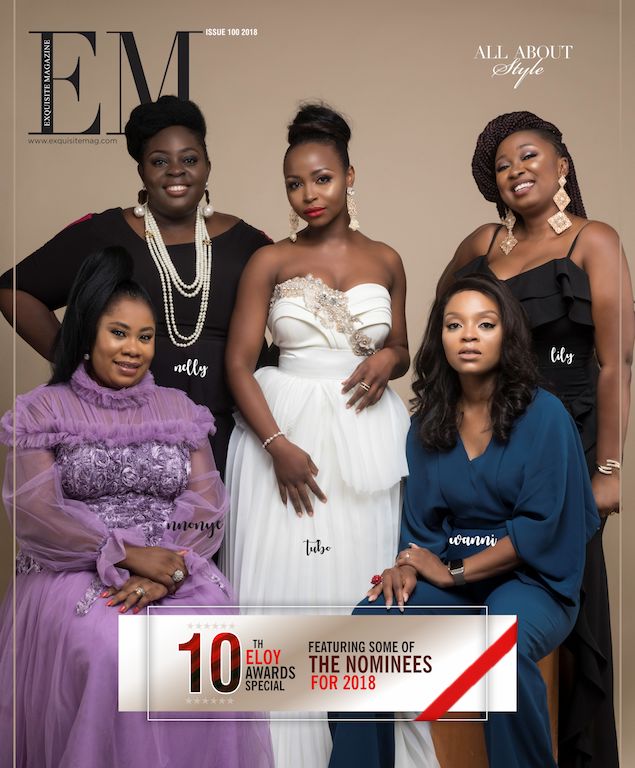 We are just some days away to the biggest Award Ceremony in Nigeria, The 10th edition of The ELOY Awards celebrating women achievements in their various fields.

An evening parading elan, style, glitz and glamour. With some of Nigeria’s most stylish celebrities and professionals on parade all coming together to celebrate Women.

This year we decided to use some of the 2018  nominees as cover divas to continue to show all women are worth celebrating. Our aim is to continue to use the ELOY Awards to celebrate, inspire, empower, encourage and challenge women to be audacious and ambitious. A woman’s place is wherever she wants to be and she can become whatever she desires to be. We want to encourage all women to unleash their true potential.

We have been consistently celebrating, empowering and motivating women since 2009. We are in the 10th year of the ELOY Awards, The Year of Audacious Ambition, The Power is Hers.

We look forward to seeing you all on Sunday.

TICKETS NOW AVAILABLE FOR PURCHASE AT..

For Sponsorships, Partnerships or Media request email us at ydagency@yettyd.com 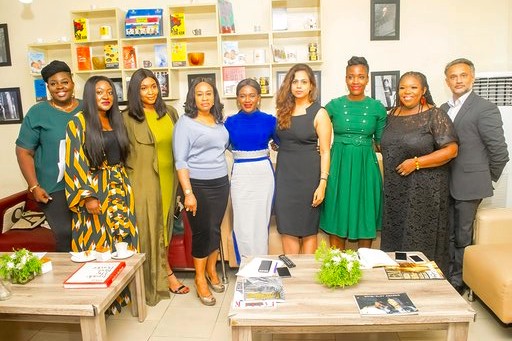 The event was anchored by Yetty Ogunnubi.

According to the founder of ELOY Awards and Publisher of Exquisite Magazine, while giving a brief rundown on the history of ELOY Awards, Mrs Tewa Onasanya says “We are delighted to have the 10th year anniversary of ELOY Awards; it is a milestone for us.

“This year, we are having 21 categories, which is about five more categories than last year’s event.

Speaking further, Tewa noted ELOY Awards is hosted to celebrate uncelebrated women who are impacting lives and adding values in their little corners. While speaking on the expectations of the event, she said, “People should expect great fun from the prestigious ELOY Awards. The best event where ladies of all categories will be celebrated and the Dress-code is to show how audaciously iconic you can get with dressing”.

Annie Ekwere, the representative of Martini, also spoke about why martini has continued to sponsor ELOY Awards over the years and the part they will be playing at this year’s edition.

For the first time, ELOY Awards will be awarding a man in the category called, ‘He4She Awards’, this category is targeted at men who help women to be their best.

Adeyinka Aderemi, a past winner of the On-Air Personality category spoke about how winning ELOY Awards opened new doors for her she said “This is a very big event; I was shocked to be nominated last year and won. Thank you for starting this to recognize women and their exploits”.

This year’s nominees who were present also expressed their surprise and gratitude for being nominated for ELOY Awards.

According to them, they never knew anyone was watching them in their little corner and had decided to nominate them for such a prestigious award.

ELOY Awards 10th anniversary is themed, “The Year of Audacious Ambition, The Power is Hers” and is set to take place on Sunday, November 26, 2018 at the Lagos Continental Hotel (formerly Intercontinental hotel).

The ELOY Awards 2018 team invites you to our Press Conference in anticipation for ELOY 2018.
The conference is set to take place on Thursday, November 1st, 2018. It is scheduled to hold from 12 pm prompt at Samantha’s Bistro 2A, Olawale Daodu (Webb road), off Alfred Rewane Road, Ikoyi. Lagos.

We want your kind participation to help us promote ELOY Awards 2018 and make it a grand success. 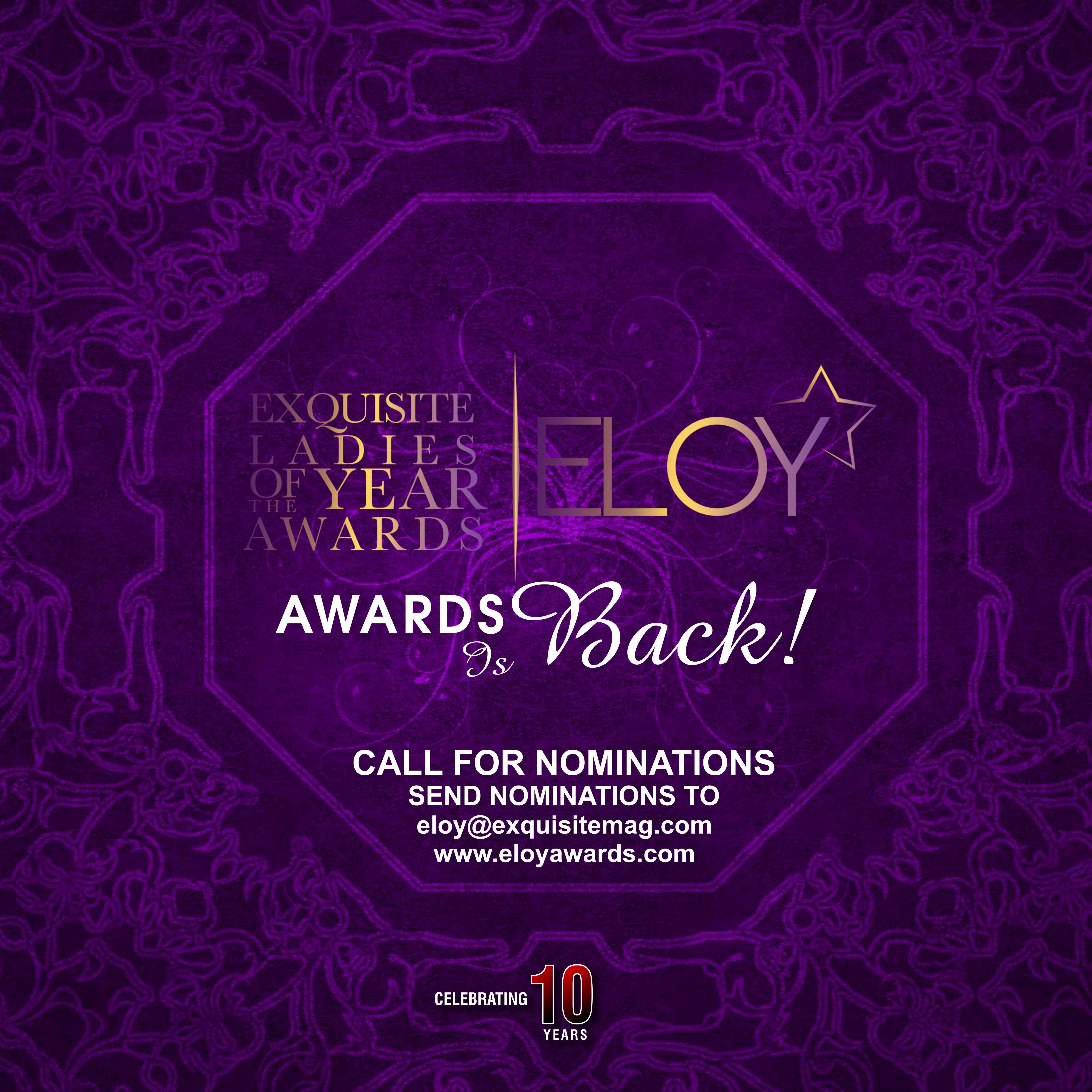 THE ELOY AWARDS is BACK! Celebrating 10 years of Championing Women.

In 2009 a long conceived idea came to life, the Exquisite Lady Of the Year (ELOY) Awards, the first ever successful award ceremony of its kind was packaged and executed by Exquisite magazine, led by its publisher Tewa Onasanya also the creator of ELOY.

The spotlight is beaming on women, It is evident in Nigeria and around the world, as policymakers and business support organizations are waking up to the idea that women are good for the economic prosperity of the nation. Financial institutions, the government and others are recognizing the untapped potential of women.

The exquisite magazine is organizing the tenth edition of the Exquisite Lady of the Year (ELOY) Awards. The ELOY Awards is first of its kind to be held in Nigeria. The aim is to have it grow each year as we recognize and award outstanding women and their roles in the society. From their humble beginnings, they have grown to become people other women and men admire and emulate while striving for success

The ELOY Awards are for Exquisite ladies in different fields who will be nominated and voted for by you. We are looking for nominations in the categories above who have been active during the ELOY period of Dec 2017 to date, they will then be shortlisted and the final categories and nominees announced in September.

The criteria for the ELOY Awards focus on the character of the individual, her ability and achievements and how her work impacts the Nigerian society.

Must have a proven record of:

1. Direct leadership: responsible for the duties of others in a business environment. The leadership ability to affect human behaviour and accomplish a mission. Must be capable of influencing people to achieve set goals.

2. Indirect leadership: she has earned the respect of others due to past or current achievements.

3. Service: has helped a colleague, associates to grow, develop and achieve goals and given assistance to the community.

4. Commitment: shows a level of dedication to her goals and ability to achieve them.

5. Achievement: shows evidence of growth in her business or profession.

6. Integrity: must act according to values, beliefs and principles that shape the future for the better. Actions of integrity.

7. Character: meeting her responsibilities and being a good Nigerian.

Send nominations to eloy@exquisitemag.com or nominate online at eloyawards.comincluding your contact details and reasons for the nominations: In your own words, please describe in detail your nominee’s specific accomplishment with a focus on impact, the potential for growth and the ability to inspire.

Our aim is to continue to use the ELOY awards to celebrate, inspire, empower, encourage and challenge women to be audacious and ambitious. A woman’s place is wherever she wants to be and she can become whatever she desires to be. We want to encourage all women to unleash their true potential.
We have been consistently celebrating, empowering and motivating women since 2009. We are in the 10th year of the ELOY Awards, The Year of Audacious Ambition, The Power is Hers.

For Sponsorships, Partnerships or Media request email us at ydagency@yettyd.com 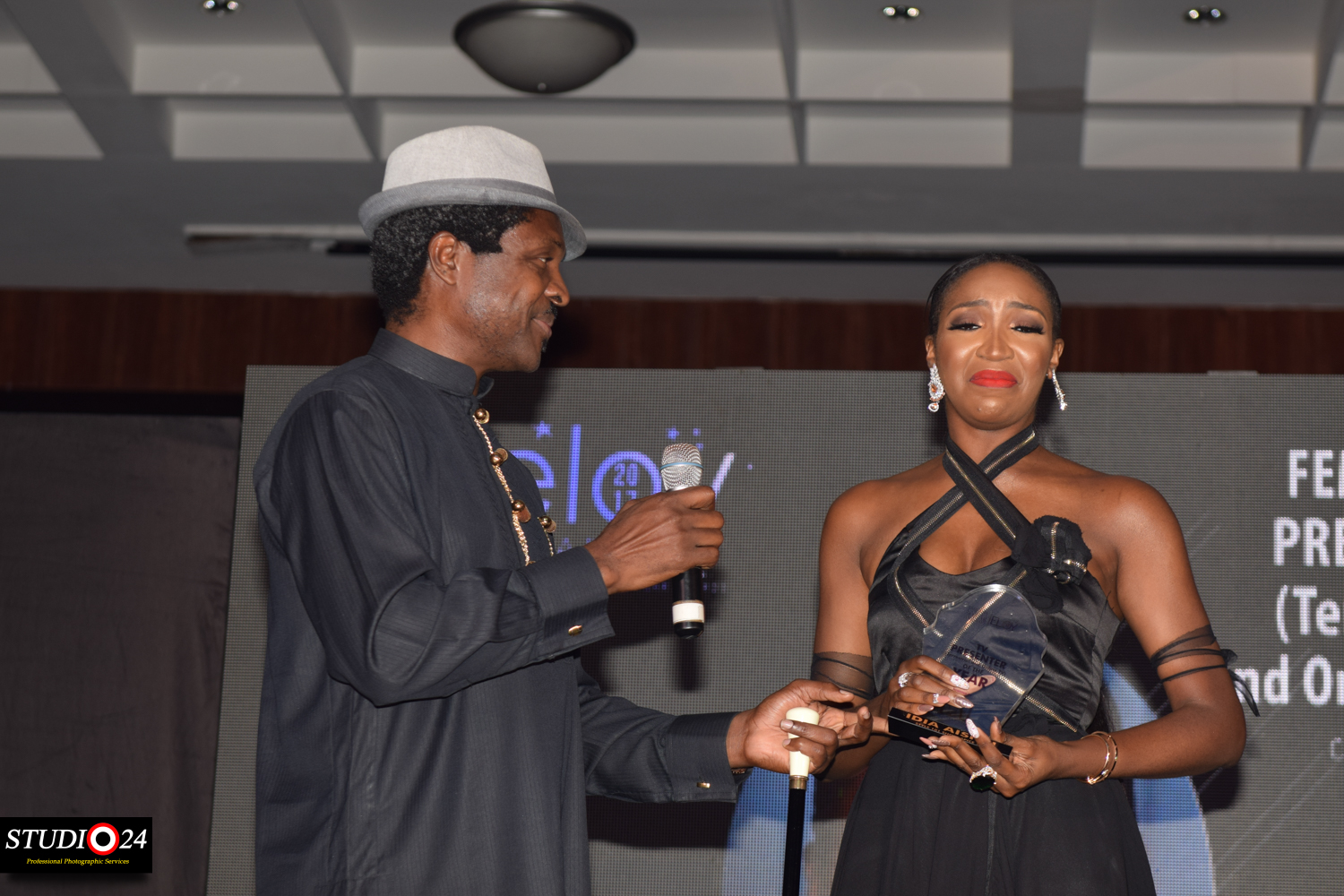 It was all glitz and glam On Sunday, November 26, 2017 at the Exquisite Women of the Year (ELOY) Awards 2017 which took place at Intercontinental hotel, Lagos. The ELOY Awards consistently holds every year to celebrate women who have been exceptional in all their endeavours and various fields during the course of the year and this year being the 9th edition was no different as the ELOY Awards hosted and celebrated Nigerian women from all walks of life. The event started with the Red carpet at 5pm, the entire entry way was beautifully occupied by some of our sponsors to showcase their craft.

There was a beauty lounge by Dabota Cosmetics with lots of freebies and free makeovers, Instant pick up had a stand where they familiarized guests about their services, they also gave 5 hampers to lucky guests during the course of the event, a Mamador oil stand was also on standby as they treated the guests to delicious chicken drum sticks and snails fried with Mamador oil.  Martini and Coca-cola also had their mini bars where they served guests.
Top designer Ayo Van Elmar also showcased her pieces all over the entry way with beautifully adorned mannequins.

The event started with an opening prayer, then an opening speech from the brain behind ELOY Awards, Mrs Tewa Onasanya after which she unveiled the new ELOY Awards Logo which she said represents a woman’s strength, power, courage, determination and empowerment. The keynote speech was delivered by Real Estate Mogul Mrs Udo Okonjo. There were performances by Ruby Gyang and Aramide in between the awards, while Sunkanmi closed the show with an amazing performance.

16.     ELOY WOMAN WHO INSPIRES IN THE PUBLIC SECTOR
CHINYERE ANOKURU